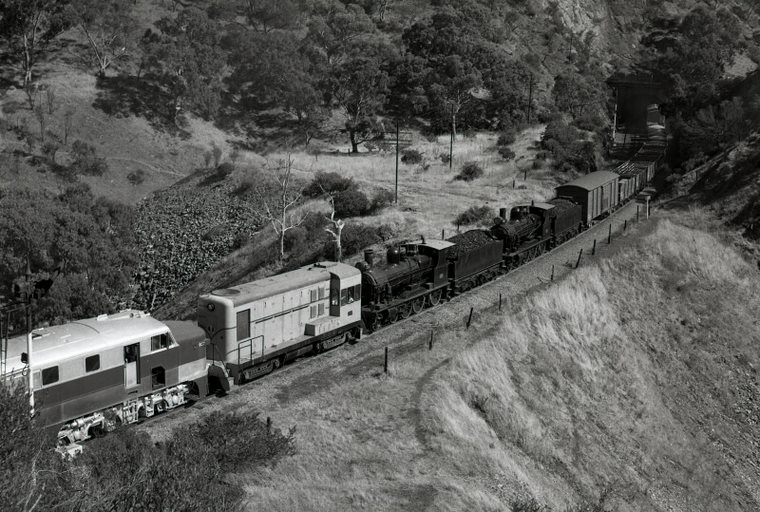 This locomotive was built in 1927 by the Fowler company in Leeds, UK and was allocated works number 17683 and was paired with tender number 19684 which carried the coal and water. It was acquired by the Racecourse Sugar Mill near Mackay, Queensland for their (then) 6 mile tramway and was their first new locomotive. The locomotive was the first of this type to come to Australia and possibly the only one ever built. The funnel was designed to stop sparks setting light to the sugar cane and the large bins each side are to hold sand which reduces wheel slip on wet rails.

Number 17683 was retired in 1965 and was placed into storage having been replaced by diesel locomotives. In 1971, it was moved, without its tender, to a playground on the Mackay foreshore where kids and the elements took their toll on the locomotive for the next 22 years. The tender was sold to a collector in Mirani but rusted away and was scrapped in the 1980s. In 1993 the locomotive was sold to a steam collector in Murrumba Downs near Brisbane. There it stayed until 2006 when it was auctioned when the property was sold for a supermarket development. It was moved to site in Virginia, Brisbane until 2018 when the Kerosene Creek Tramway purchased it to save it from scrapping and moved it to Sydney. In 2021 they offered it on loan to the Milang Railway Museum and we subsequently purchased it

The track gauge is two feet.

It was shipped to Ruston & Hornsby (Australia) in Melbourne on 5th July 1938.“The Ruston” was owned by the Waratah Gypsum Company and was employed at their salt and gypsum harvesting operation at Stenhouse Bay at the bottom of the Yorke Peninsula. By 1969, the Company had applied numbers to their fleet of locomotives and “The Ruston” became number 304.

By 1971, operations had ceased and “The Ruston” was donated the Mile End Railway Museum, the predecessor of today’s National Railway Museum (NRM).

In April 2017, the NRM loaned the locomotive to the Port Milang        Historic Railway Museum for restoration and “The Ruston” is now maintained in running condition on the Museum’s two foot gauge tramway.

The Fordson tractor was manufactured at Dagenham, Essex, UK in 1940 and was exported to Australia. On arrival it was converted to a rail tractor by the Malcolm Moore Company, Melbourne in 1942 using a chassis dated around 1923.It was then sold to the Adelaide Cement Company who used it at their Klein Point quarry on the lower Yorke Peninsula.·In March 1954, it was sold to the South Australian Harbours Board for use at the Port Price jetty on the upper Yorke Peninsula.

The tractor is hand cranked, starts on petrol and then runs on kerosene. It has been restored and the engine is periodically run.

In 1941 the Commonwealth Department of Supply ordered four Type 217 Trammer locomotives from the British Electric Vehicles (BEV) division of Wingrove & Rogers Ltd. Liverpool, UK. They were specially fitted with bronze wheels to reduce the risk of sparks and were shipped to Adelaide in April 1942.

The BEV is powered by 24 x 2 volt batteries giving it a towing capacity of 10 tons at 5 mph.· The coupling rods were removed soon after delivery but were replaced in 2021.

The locomotive’s task was to transport explosives around the Smithfield  magazine compound, north of Adelaide, which it did until 1998. It was then purchased by the Milang Railway Museum at auction together with four wagons, a kilometre of track, twenty points and a battery charger.

Four of these wagons were purchased by the Museum at auction in 1999. They were built at Islington in 1940 to transport munitions around the Smithfield munitions depot. Two have been converted to carry passengers using old bus seats.

In 1940, during the Second World War, the largest ammunition factory in Australia was located at Salisbury some 22Km north of Adelaide. It employed 6400 people, most of them female. They manufactured the fuses, cases and explosives and conducted the final assembly of mortar bombs, rifle and machine gun ammunition, artillery shells and aerial bombs.

Cordite, an explosive used in artillery ammunition, was manufactured and pressed into thin sheets, which still contained a quantity of acetone solvent from the manufacturing process. The sheets of cordite were laid in racks on perforated trays in the cordite wagons, which were hand-pushed to the cordite drying-house where the wagons were coupled together in rakes and warm air was blown through them. The acetone, being very volatile, was evaporated out of the cordite and recovered to be re-used.

Also known as Dobbins, Tipplers, Ore Cars, etc. this wagon was one of many used at Jervois, opposite Tailem Bend, in 1957. After the River Murray flooded in 1956, levee banks were constructed to protect the Jervois community from future floods and many of these wagons were used.