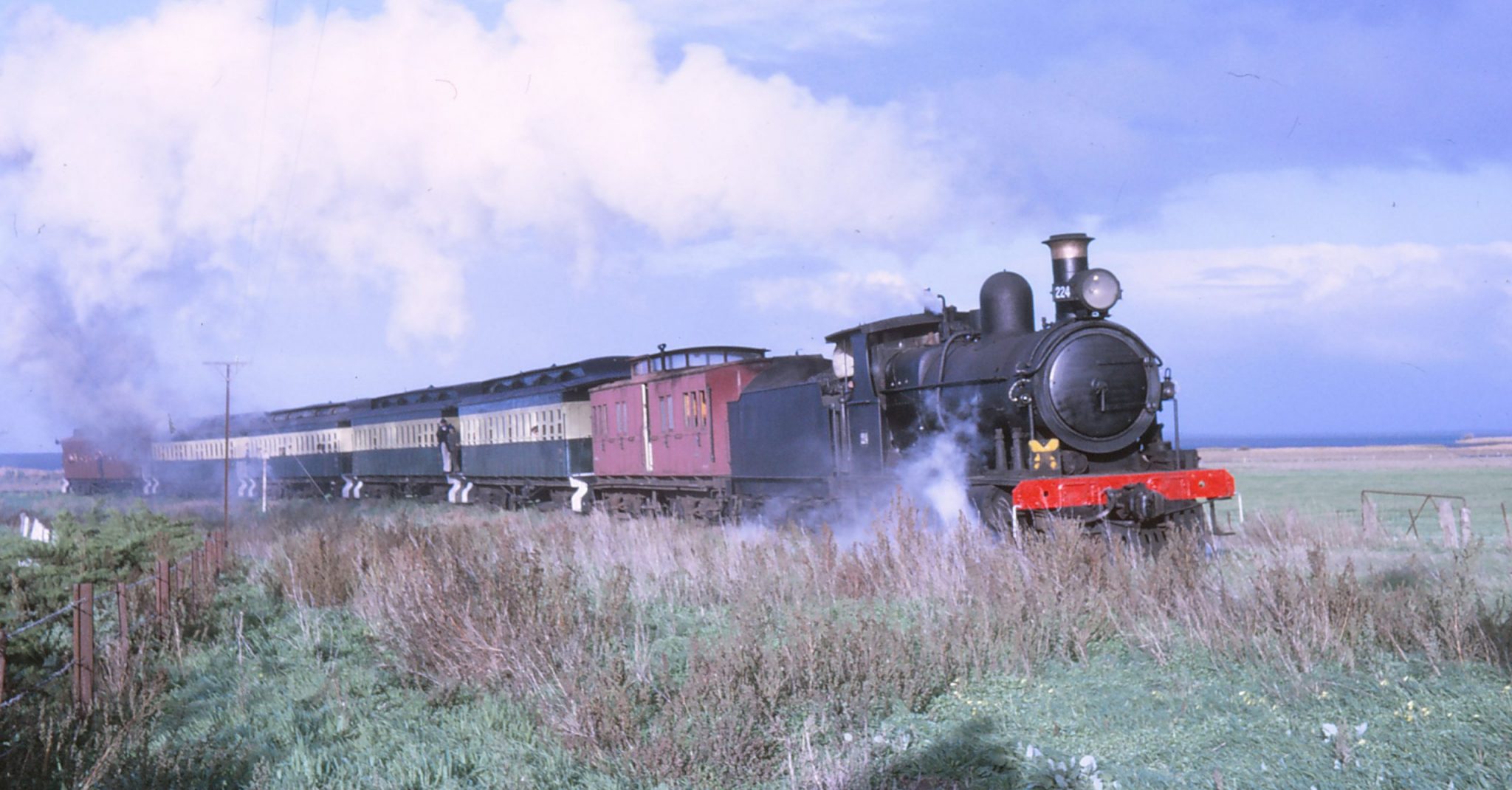 The first public railway in South Australia, linking Goolwa and Port Elliot, was completed in May 1854. Its purpose was to link the recently-established Murray River trade with oceangoing ships as it was held that the mouth of the river was too hazardous for navigation. It is better described as a tramway as the wagons were pulled by horses over extremely light weight rails which were fastened to the sleepers with 4 inch screws. The project owed a great deal to the enthusiasm and foresight of the Lieutenant Governor, Sir Henry Young, who also obtained the agreement of the British government to make available the necessary finance.

Unfortunately the anchorage at Port Elliot proved to be unsatisfactory—seven vessels were wrecked there between 1853 and 1864. It was therefore decided to develop Victor Harbor as a sea port and extend the tramway to the new facility. The extension, which involved a viaduct at Watson’s Gap and a bridge over the Hindmarsh River, was opened for traffic on the 1st April 1 864.

The success of the Goolwa—Port Elliot line aroused interest in Strathalbyn where local business men saw advantages for them in a direct link with the new port a Victor Harbor. As a result in 1856 and 1857 surveys of possible routes were undertaken.

By this time the Port of Milang was part of an ever increasing Murray River trade and a rival suggestion was advanced that the new line should be from Strathalbyn to Milang. The distance was shorter and the construction would be cheaper and a jetty and horse tramway had been built to handle the increasing trade.

Twenty people attended a meeting late in 1857 at the Lake Hotel, Milang in support of the Milang line but shortly afterwards a large meeting at Strathalbyn confirmed the desirability of a line to Middleton, joining the existing line there. A lively correspondence in the “South Australian Register” ensued with proponents of the rival routes arguing their cases vigorously. Against the Milang connection was the fact that goods for export from Strathalbyn would have to go by train to Milang, then boat to Goolwa and by train again to Victor Harbor.

This was countered by A.H. Landseer who pointed out that the steamer Melbourne was ready to sail directly from Port Adelaide to Milang through the Murray Mouth—thus providing a direct link. In November 1859 Milang’s hopes sank when the “Melbourne” foundered at the Murray Mouth.

Ten years later a tramway from Strathalbyn to Middleton was opened by the Governor, Sir James Fergusson, on Tuesday 23rd February 1869.

In 1881 there was a new opportunity to push for a branch line to Milang. A Select Committee was appointed by the S.A. Government to investigate the possibilities of connecting the Strathalbyn—Victor Harbor line with Adelaide. One of the members of the Select Committee was A.H. Landseer and he made sure that the Committee heard evidence in favour of including a link with Milang. On the 8th November 1881 the House of Assembly passed the Railway Bill.

Tenders for the construction of both lines were called on the 18th April 1882 and Walker and Swann were successful in obtaining the joint contract for a price of £143,678. Construction on the Strathalbyn to Mount Barker Junction line was done first but by August 1884 most of the work had been completed and the contractor was able to give more attention to the Milang line. By November the line was completed and only the work on the platforms and other station buildings at Sandergrove and Milang was still to be done. At this time a reporter from the “Southern Argus” was given a preview of the track:

“Once fairly on the new line we begin to rise, and were soon on a lengthy bank which leads to a rather long cutting, a stone culvert for floodwaters being crossed just here. These three items just about make up the engineering ‘difficulties’ of the line, the remainder of the course being over a dead level of about the most dull uninteresting scrub country one could well imagine, the line running so straight that the eye can only see the ‘vanishing point’ ahead. ‘We are on our own line now’, Mr Walker tells us, ‘we don’t mind how we go along here’, and when we contrasted the speed with that we have travelled at on the Government line we smiled. We bowled along at considerably over thirty miles an hour and consequently, though we had a couple of stoppages to let off men and stone, the eight miles between the junction and Milang did not take many minutes to traverse. It ended with a graceful curve, skirting the side and front of the township, giving a beautiful view of the lake, and joining the old jetty tramway just in front of Mr Landseer’s warehouses.” (Quoted in “Railways in the Adelaide Hills” by Roger Sallis.)

The line was opened on the 17th December 1884, the same day the upgraded Strathalbyn—Goolwa section was opened for steam—hauled instead of horse—drawn trains. There was no official opening but the Commissioner of Public Works allowed the public free rides to Milang and back. Those wishing to make the journey had to catch the 10.00 am Goolwa train from Strathalbyn and change at Sandergrove.

The line’s engineer, Mr J. Reed, organised a special train for invited guests during the afternoon. About halfway between Sandergrove and Milang the train was stopped for half an hour so that the party could enjoy an al fresco picnic in the scrub. On arrival in Milang they were entertained in the Institute Hall by Mesdames Landseer and Dunk where congratulations were exchanged. The party departed from Milang soon after 6.00 pm and arrived back at Strathalbyn just before seven o’clock.

Features of the Line

At Sandergrove the Milang line served as the passing siding for the station, sharing an island passenger platform with the Victor Harbor main line. A goods siding also catered for local goods consignments.

The only intermediate station was at Nurragi where there was a 70m long goods siding. There was also a passenger stop at Punkulde where the line crossed the Milang-Finnis road.

The Milang yard had a mainline, passing siding and livestock siding with the goods siding being an extension of the main line. A short track at the Western end led to a small turntable.

From Steam to Diesel

The first services to Milang were all mixed trains drawn by steam locomotives which were based at Strathalbyn. Then the passenger service was taken over by the Model 55 rail cars which had been introduced into South Australia by Commissioner W.A. Webb in 1924. Then in 1930 these were replaced by the Model 75 rail cars.

In 1942 the goods traffic had declined to such an extent that it could be handled by the rail cars hauling a wagon or two. The passenger service ceased on November 30th 1968 but the line remained open until July 1970 for occasional goods trains which were hauled by an 830 class diesel-electric engine.

As well as the regular services there were also special trains bringing visitors from Adelaide and other parts of the State. In 1909 three hundred scouts arrived by train on Christmas night for the first State camp in the history of the movement in S.A. More visitors thronged the town for the annual Regatta on Proclamation Day, 28th December which featured a motor launch race for only the second time. Several excursions arranged by the Australian Railway Historical Society were features of the last years of the line. In 1964 a special train was hauled by two Rx class steam locomotives (196 and 233). In August 1968 the journey was made by model 75 rail car No. 55 and carriage No. 313. Then Rx 224 pulled the last train which included five carriages and the line was pulled up and the station buildings removed.

That would have been the end of the story if it were not for the efforts of the members of the Port Milang Historic Railway Museum Inc. who were able to retrieve the Station building and re-establish parts of the station yard. Their efforts were rewarded when the Governor of South Australia, Dame Roma Mitchell, officially opened the complex on the 4th October 1992.

There is an $8, 28 page booklet “The Lakes Railway” in our on-line store which tells the whole story.

Alex. E. H. Stone, Tel. (08) 8537 0630. Information from “To Alexandrina’s Shore”, edited by Jim Faull, “Railways in the Adelaide Hills” by Roger Sallis and the website of the National Railway Museum, Port Adelaide. Unless otherwise noted, photos are from the collection of the Milang & District Historical Society and the Port Milang Historic Railway Museum.